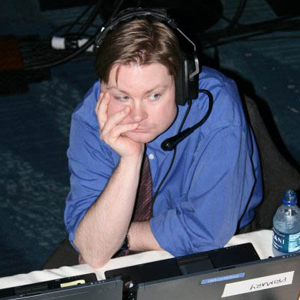 Jason Thomas is an illustrator and animator living the good life in Decatur, Georgia with his dog (Wendy) and his cat (Coleslaw). His work focuses on emotional robots and monsters with social difficulties.

At his booth during one of the many art festivals in Georgia, he performs a live draw where he will draw a complimentary robot or monster for you. Some of his favorites include a monster who is very protective of his beloved creamed corn, a robot who is insecure about one of his claws being too small, and a robot-monster who never gets invited to parties, but gets to celebrate both Robot Christmas and Monster Christmas.

When he is not painting, he is probably working on his animated Sci-Fi epic, “Cradle Me, Sky”.www.cradlemesky.com