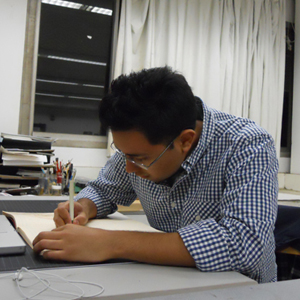 Harry was born in 1981 in Guatemala. His current body of work contains repeated visual elements, including basic geometric shapes, patterns, characters, color which appear throughout the body of work as a whole. He sees his imagery as a visual language, which can be interpreted differently by each person who views it. Though there is no literal translation to his imagery, the viewer can form a connection through the patterns and elements that they are familiar with. The familiarity of the patterns and shapes he uses in his work can be traced back to terracotta vases of the Archaic Period to Native American crafts. In addition to these visual elements, the processes in which these images are produced play a major role in his practice as he aims to achieve a balance between modern digital printing and traditional printing methods, like serigraphy. Latin America has a rich tradition in printmaking, and he sees his work adding to that tradition.